Had some 3 lb bags of Pils DME originally bought for starters that needed to be used up. Since two bags is way too much for a smal batch of low-gravity beer we partial mashed.

Stuffed the keg into the fermentation fridge to chill down to 66°F before pitching a pack of Safale S-05 the next day.

Why the hell not?  To make it even better, we’re going to barrel this for a month or two and have a strong barreled brown ale. 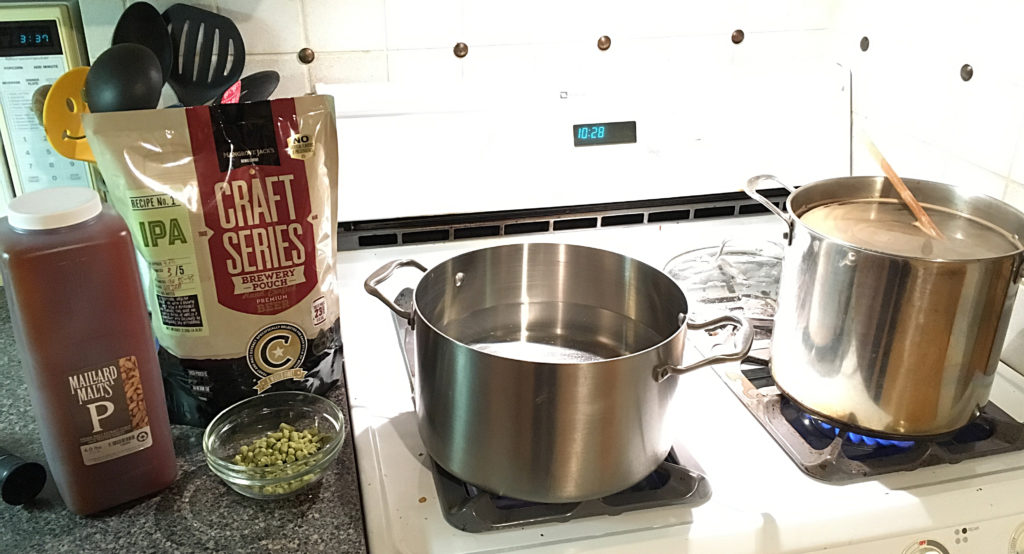 We got 1.25 gallons of partial mash wort at 17° Plato wort (1.070, or 1.018 in 5 gallons).  We then added the Mangrove Jack’s and Pils extracts and topped up to 1.8 gallons for our short boil.  Topping up to 5 gallons we achieved an original gravity of 1.076, right on target.  After minor oxygenation we pitched two packs of rehydrated yeast, Safale S-04 and Mangrove Jack’s M07.  Both are apparently Whitbread-derived strains so the profile should be similar.

Unfortunately, after two weeks at 67°F fermentation stopped at 1.023, or about 7.4% ABV.  That’s not good enough, so we made a large starter of Wyeast 3711 French Saison (which is recommended for stuck fermentations) and pitched that.  Fermentation started up again and is still going after a week.  The yeast combination should be interesting, especially after it’s been in the barrel for a while.

There are a few Mangrove Jack’s pouch kit Youtube reviews from New Zealand (where Mangrove Jack’s is based) but nothing from the northern hemisphere.  They seem like a step up from Munton’s or Cooper’s pre-hopped kits.  Plus Adventures in Homebrewing keeps having $16 sales on them.

We also picked up the London Bitter and American Pale Ale with Dry Hops pouch kits, which we’re going to brew straight-up, though with Briess Pale Ale DME instead of the included 2.2lbs of corn sugar.  We’ll review each of them in their own right, so you have some clue whether they’re the king of the pre-hopped mountain.

We saved time in a couple ways:

We achieved 80% efficiency on our mash, with 4 gallons of 1.028 wort, to which we added the 6lbs of Pils extract.  Our original gravity into the fermenter was right on target at 1.068.

Unfortunately, fermentation stopped at 1.019, quite a bit higher than we were hoping. Whether that’s because of the malt extract, too little pitched yeast, or oxygenation not working well at 200F, we’re not sure.  But it tastes pretty good and is currently carbonating itself with a spunding valve. 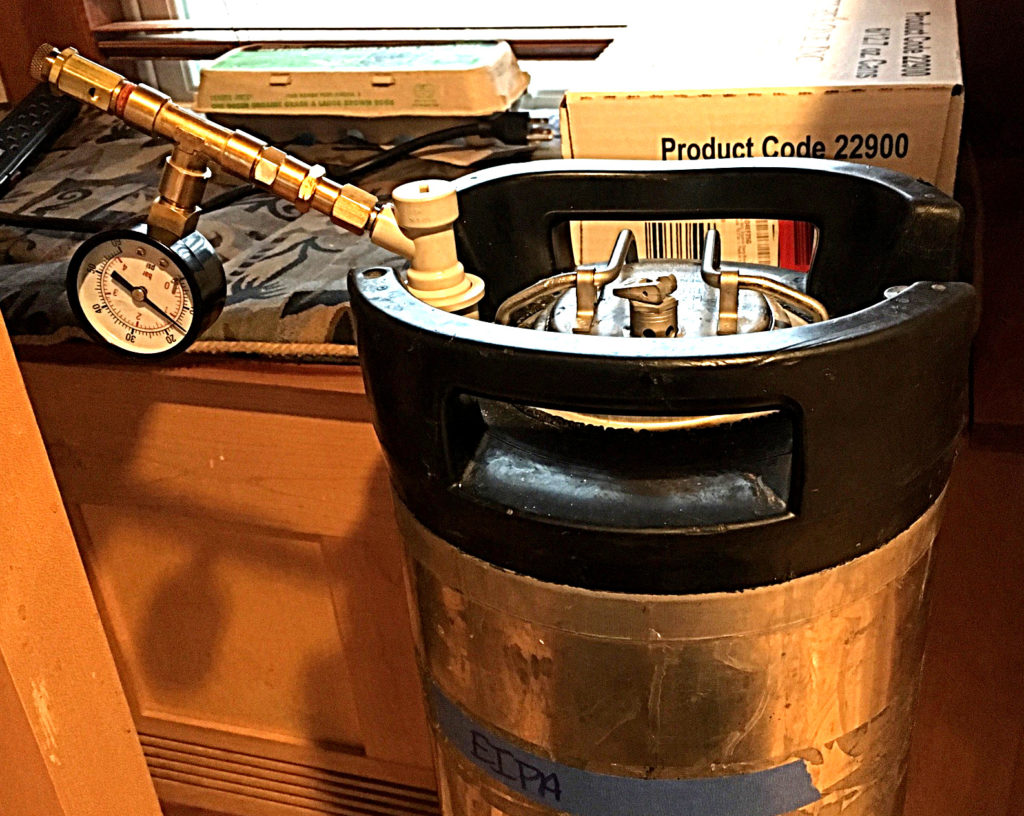 Having stopped at 1.019 it was a bit too thick of a beer.  So we grew a starter of Wyeast 3711 French Saison (which Wyeast recommends for stuck fermentations) and pitched that into the warmed keg.  Let’s see what happens…

Cascade hops were picked during the mash and tossed right into the boil.  Kept the grain bill simple to see what the Dutch De Swaen malt tastes like.  Though subtle, it’s good and we’d definitely use it again.  OG of 1.055 fermented down to 1.014 for a smooth 5.4% ABV.  Hop flavor was excellent.

For whatever reason, efficiency was great on this one.  Began fermentation at 1.072 and ended at 1.012 for 7.8% ABV.  After two weeks in primary, it got kegged, dry hopped, cold conditioned for two weeks, and served.  Tasted like a great IPA, and after six to eight weeks tasted like a great double IPA without the alcohol burn.

We nailed the original gravity at 1.094.  But since it was fermented at ambient temperatures during February it got down to 59°F at night it only finished around 1.035.  Regardless, we barreled it into a freshly dumped 11 Wells 6 gallon whiskey barrel.  To help reduce the gravity further we brewed up a 1 gallon batch with 3.15lbs of Amber LME and 1oz Centennial @ 8.7%AA boiled for 10 minutes and fermented it for 3 days with one pack of S-05.  At peak fermentation we added the small batch to the barrel.  One month later we kegged and got 5.5 gallons of 1.024 wort for a final ABV of 9.5%, not including any whiskey from the barrel wood.

It’s great and it keeps getting better.

We wanted a maltier flavor so we swapped out some of the 2-row for an equal amount of dark Munich and bumped up the aromatic malt a bit.  We also wanted slightly more bitterness, so we added some hops at the 60 minute mark.

Wyeast 1272 is very active fermenter, blowing foam out the airlock both times we’ve used it even with Fermcap S.  Unfortunately that also blows out some of the spice mixture, resulting in somewhat muted pumpkin spice flavors.  We’ll probably use HDPE buckets next time instead of kegs to preserve the spices.

But this beer doesn’t quit.  We brewed it in early December and blew the keg in early April, and it was just as good at the end. 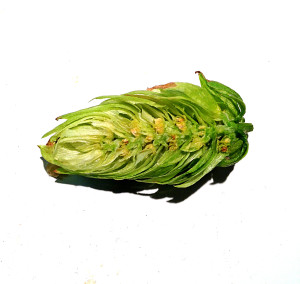 Our previous Fresh Hop IPA had a flavor we can only describe as “plastic”.  We attribute that to two things.  First, we picked the hops on a Saturday and brewed with them on a Monday.  While the hops were stored in a cool, dry place during that time, they did begin to oxidize.  Second, we used almost 5 pounds of fresh hops, which may have contributed a distinct grassy flavor.  How can we do better this year? 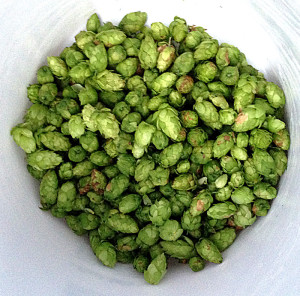 This year we went back to the basics.  A simple pale ale of just two-row, a touch of wheat, and a pinch of the lightest crystal you can buy.  We used a good clean bittering hop at the start and all our wet hops at the end, allowing the wet hops to shine through in the flavor and aroma without too much malt interference.  Commercial bittering hops will provide a known level of IBUs that we simply couldn’t estimate if we used our own wet hops.

We also picked the hops during the mash and pre-boil and ran them 30 feet back to the kettle to toss them in at the end of the boil.  You can’t get any fresher than that. 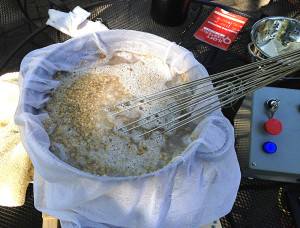 This is a 5 gallon batch, but we brewed it on our 3 gallon system to a higher gravity and diluted with filtered water up to 5 gallons.  Using the 3 gallon BIAB system meant we could brew outside, right next to the hops, enjoying the last gasps of fall before the long, cold winter.

The mash went well and we started our boil with 3.9 gallons at 1.068.  We boiled down to 3 gallons, picking our Cascade hops right off the vine during the boil and throwing them in at the 5 minute and 0 minute marks.  After a long hop-stand when the boil was done, we got a bit over 3 gallons of 1.083 wort and diluted that with 1.5 gallons of cold filtered water to a final 4.5 gallons of 1.055 wort.

After fermentation at 67°F for two weeks got the beer down to 1.008 for 6% ABV, quite a bit higher than we expected.  But the beer was excellent, well balanced, and a huge improvement over last year. 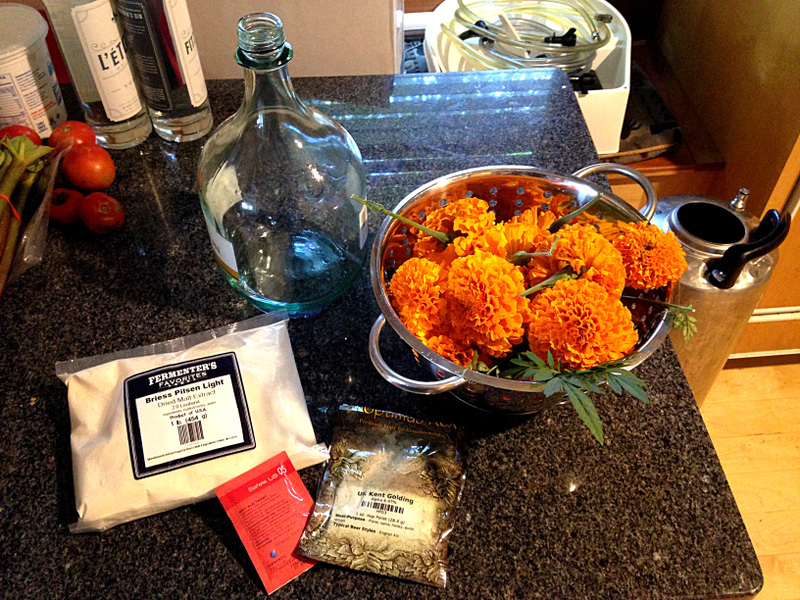 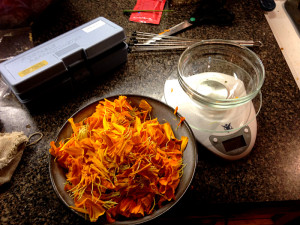 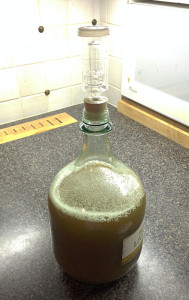