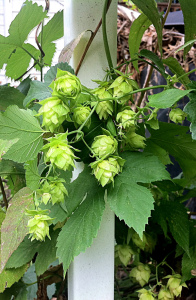 Most “seasonal” beers seem to contain spices associated with a holiday (pumpkin or spruce), added fruit flavor to be more refreshing (lemon and shandy), or follow a style that’s brewed at a specific time of year (Oktoberfest and Maibock).  But fresh hops make beer truly seasonal the same way corn-on-the-cob means summer and pumpkins means fall.

Hops are typically harvested around late August and early September, and once picked they must be used immediately or dried.  While they can be stored fresh under the right conditions (eg, refrigerated without light) for at most 48 hours, over that time the fresh hops gradually oxidize and loose their flavor and aroma.  The sooner you brew with fresh hops, the better.

The part of the hop used for beer is the “cone”, the light-green flower-like groups of petals shown above.  The base of the cone contains lupulin glands which have the good stuff we brewers really want, including the bittering, aroma, and flavor compounds that make beer taste like beer.

So when a friend mentioned she grew hops and nobody wanted them, we jumped at the chance to spend a beautiful morning picking almost 5 lbs of Cascade and Nugget, and a day later, 4 oz of another unknown variety from a neighbor down the street.  Since they are all home-grown almost everything was unknown; we have no idea what their alpha or beta acid contents are, we don’t really know what they taste or smell like, they’re just there.  Use them or loose them.

So we used them, but how?  So many ways…

We decided to do them all, because we Brew It Right.  Well, except Whirlpool hops, because they are incompatible with using a hopback since the hopback requires near-boiling wort to extract maximum aroma, while the whirlpool chills the wort to much lower temperatures.  But we’ve got 5 lbs of fresh hops, so why not?

The mash hops stop touching wort at the end of the mash, but the first wort hops stay from the time the sparge starts until the boil is done, so they contribute most of the bitterness.  Then we hop-burst with two-and-a-half times as many hops in the last 10  minutes to maximize the flavor and aroma, which is where fresh hops really shine.

Many other recipes recommend using dried bittering hops instead of fresh hops, since fresh hops can cause a grassy taste when used in quantity, and you can’t control bitterness because you don’t know the alpha acid content.  But we’re going all fresh here, so dried hops don’t work for us.

But how much should we use?  Since we don’t know what the alpha acid content is, and we don’t even know which variety one plant was, we have no idea how bitter the beer will be.  We can get a rough estimate by taking the mid-range alpha acid content, and using 5 to 6 times as much fresh hops as pellet hops (since they still contain lots of water), but it’s still just an estimate.  That doesn’t help at all with the unknown variety, so we used it only later in the boil and in the hopback.

When fresh, we want hops to be the star.  But we still need some malt backbone too.  A fresh hop beer should be simple, with mostly two-row malt.  The Vienna should add some malty notes, but 8oz (4%) isn’t enough to bust through and take over.  The Crystal 10L (2%) should provide a touch of sweetness but again not enough to pick out.  And a dash of Carapils for body and head retention.

Hmm, what about the Brewer’s Crystals?  More on that below… 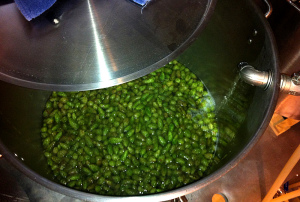 We had three hiccups with the brew.  First, we use Chugger magnetic-drive pumps where the liquid side is completely separated from motor itself to ensure sanitary conditions.  Unfortunately, there is a Teflon thrust washer that the impeller rides against, and these do wear out.  Our HLT pump screeches whenever the flow is low (like during the sparge where slow is better) so we had to keep a higher flow.  This meant we were under gravity by about 5 points (7.5g @ 1.040 instead of 7.5g @ 1.045) at the beginning of the boil because the quick sparge couldn’t rinse as much residual sugar out of the grains.

But we had Brewer’s Crystals lying around, just waiting for our first attempt at cloning the pride of Baltimore, Natty Boh.  They look like white sugar but mimic the profile of wort. So while corn sugar dries out the beer and contributes no body, Brewer’s Crystals should produce something more beer-like.

Second, since there was so much debris in our boil kettle from the fresh hops, the hopback clogged halfway through the chilling process.  We packed way too many hops into it, which did their job too well.  Every brew is a learning experience, right?

Finally, our Wyeast 1332 Northwest Ale smackpack didn’t swell, so we tossed it and used Safale US-05 dry yeast instead.  We bought the 1332 in May when it was fresh, but liquid yeast viability decreases about 20% per month, compared to 4% for dry yeast.  So by September only 15% of the cells in our pack were alive and well.  Had we used it we would have severely under-pitched, leading to stressed yeast, longer lag-time and increased infection possibility, and increased ester formation.  To ensure a great fermentation, always pitch a sufficient amount of yeast and always maintain a correct temperature range.  And always keep a spare pack of dry yeast around for situations just like this.

After these minor setbacks, we ended up with 5 gallons of 14P (1.057) wort, which smelled extremely hoppy, tasted very floral, and had a mellow bitterness.  The fermentation chamber smelled even better during our daily check-ups.  We’re excited about this one, and we’ll do a proper tasting review when it’s ready!

After the previous batch ended up on the floor of the freezer, we re-brewed the Use-it-up Stout last month.  This time we’ll call it English Stout, because we had used up all the old Maris Otter malt and had to buy more.  Now that we’ve been able to sample all five gallons we think it turned out very well.

This time we also entered it in a local homebrew competition in the American Stout category (13E) and it received a mediocre score.  We believe this was for three reasons:

So if you’re going to enter a competition, do your research and pick the right category.  Also, know when your beer is at its prime, and make that the time when the judges crack the bottle open.