A while back we brewed a Deschutes Jubelale 2009 clone, and it is great.  It’s different than it should be, but in a really good way: it’s darker and stoutier, almost like a Russian Imperial Stout, but with less alcohol and not quite as bitter.  Why? 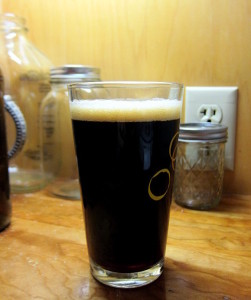 It finished really, really high at 1.024, eight points above where it should have been.  In a lighter beer that gravity would taste very out of balance, but it works great in darker ones.  But like always, when something doesn’t turn out like you expect, you need a post-mortem.

The first reason for the high finish could be lack of oxygen in the wort.  After you pitch the yeast they need replenish their nutrient reserves before they are healthy enough to reproduce and begin fermenting the wort.  That requires oxygen, but most of the oxygen is driven off during the boil.  This is why you’re told to rock the fermenter or pour the hot wort back and forth between buckets.  Here, we pump the beer through a strainer into the keg, which apparently doesn’t work that well.  This hasn’t been a huge problem until now, but we need to step it up.

The second reason is likely inconsistent fermentation temperature.  Since the refrigerator with the two-stage controller is currently our kegerator, we’re running a bit under-staffed in the temperature control department for fermentation. All we’ve got is our styrofoam Son of Fermentation Chiller hooked up to an old thermostat wired for cooling, but not for heat.  Come winter the basement temperature drops below optimal for ale yeast during the later stages of fermentation, leading to higher final gravities. We need to do better.

So when we brewed another beer last week, we stepped up our game with an aeration stone and oxygen regulator and Bernzomatic O2 canister.  Two 15 second bursts are all it takes to get more oxygen than 5 minutes of bucket rocking can do, giving the yeast a great start in life.  Then we add some Fermcap S to keep the krausen down since we ferment in kegs.  Imagine our surprise the next day when we find this:

And that is why Fermcap S is not God.  No amount of Fermcap will prevent an overfilled keg, an overly active fermentation, and really happy yeast from becoming a volcano. Clean-up was not fun.  Next time we’ll just put less wort in the kegs.

On the temperature front, we have a 7 cubic foot chest freezer on-deck and a slightly more affordable controller with support for a heater on the way.  Stay tuned to see how that comes together.

Each time we get a bit closer to Brewing it Right.  So will you!

A few weeks ago we brewed a Jubelale 2009 clone which we partigyled into a Bonus Bitter.  The beer started at 1.036, finished at 1.008 for 3.6% ABV, and is indeed a nice, light, easy-drinking bitter.  But there was a flavor problem: good bitterness at the front and maltiness at the back, but a huge black hole of nothing in the middle.  It’s hard to describe; the initial bitterness changes to a slightly tannic taste without any body at all (like a glass of bitter water) before the final malt appears.  What can plug that hole?

Brown sugar just happens to have the right flavor profile to complement the tannic note and add some body to the hole in the middle.  The molasses notes are just a bonus, but still to style as British brewers often use various brown sugars, caramels, or molasses for color and flavor.  The only question was how much to add…

A solution of 3 parts boiling water to 1 part sugar was made, whisking the sugar until completely dissolved.  Three 6oz glasses of the beer were poured.  The first was the control with no sugar added.  The second received one teaspoon of sugar solution, and the third glass two teaspoons.  Results indicated that one teaspoon was the best amount; it was a noticeable improvement over no sugar at all, while two teaspoons was too sweet.  Calculating from one teaspoon per 6 ounces to the 4 gallon batch gave about 1.75 cups for the whole keg. 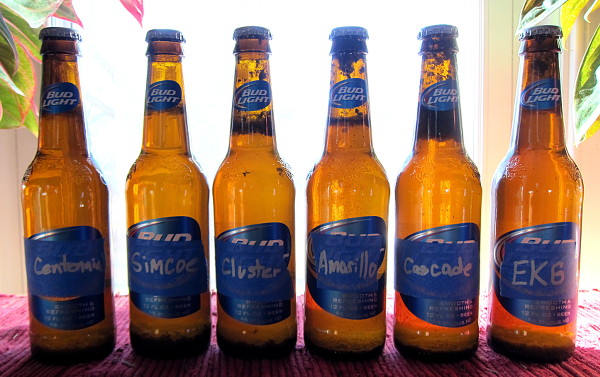 Want to know what hops actually taste like?  Try this experiment: dry-hop Bud Light.  Many have done this before, but Brew It Right wants some input too.  The concept is easy; buy some Bud Light, drop-hop it, wait 5 days, and drink it!  Obviously it’s slightly more difficult, so learn from our mistakes:

Due to #1, only the Simcoe, Centennial, and the Amarillo bottles held pressure, which made the flavor and aroma crisp and very apparent.  The others were muted and muddled, and pretty worthless for testing.  If you haven’t done this before, it’s very surprising how well the hops come through.  Centennial had a definite fruit smell and very clean flavor, while Simcoe had resin/earthy/pine notes.  While doing this you can just imagine what beer you can brew that will work well with the various hops.

And as it turns out, Bud Light goes very, very well with Centennial…