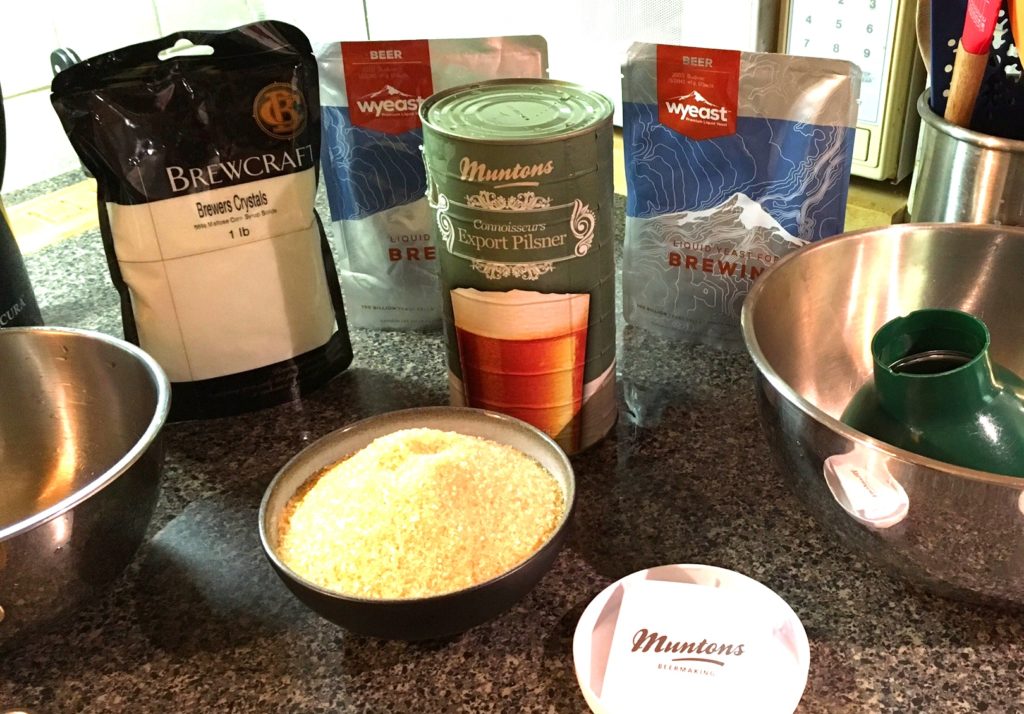 What if we took what some would consider mediocre ingredients and tried to make great beer from them?  Let’s see:

This isn’t a total slum-brew since we’re not just using 2 lbs of table sugar.  Instead, we had some Brewers Crystals lying around which we decided to use.  These look like corn sugar (dextrose) and are in fact made from corn, but mimic the fermentability profile of regular barley wort by containing mostly maltose and some unfermentable sugars.  They boost alcohol without losing body.

We’re also using Turbinado sugar because why not; maybe they’ll add some interesting flavors to an otherwise lower-gravity kit.  It might turn out that the flavor doesn’t quite work in what’s supposed to be a pretty clean beer, but we’re hopeful.

We hit 1.052 original gravity and lazy-chilled to 53°F before pitching 2 packs of Wyeast Budvar Lager.  We did not aerate, though we probably should have.  10 days after pitching we raised the temperature to 63°F for a diacetyl rest and to help the yeast finish the ferment.  11 days after pitching the gravity had dropped to 1.018, and 16 days after pitching it was still dropping at 1.016.  We haven’t checked it again yet but we’d like to end somewhere around 1.013.  Whenever it’s done, we’ll cold-crash for a few days then rack over to a serving keg for the lagering process.

It finished at 1.014 and tasted like Chardonnay during kegging.  We’re not sure if that’s due to lager yeast not liking Turbinado sugar or what.  It cleaned up in the keg, but it still has a wine-like taste when it gets warm.  But serve it chilled at 35 degrees and it’s kinda like Grain Belt: kinda-not-really hoppy, with a slightly sweet finish. It’s actually not bad for what it is, but we were hoping for a cleaner beer.

Next time: maybe use Pils malt extract or dextrose instead of Brewer’s Crystals and Turbinado.

Cascade hops were picked during the mash and tossed right into the boil.  Kept the grain bill simple to see what the Dutch De Swaen malt tastes like.  Though subtle, it’s good and we’d definitely use it again.  OG of 1.055 fermented down to 1.014 for a smooth 5.4% ABV.  Hop flavor was excellent.

For whatever reason, efficiency was great on this one.  Began fermentation at 1.072 and ended at 1.012 for 7.8% ABV.  After two weeks in primary, it got kegged, dry hopped, cold conditioned for two weeks, and served.  Tasted like a great IPA, and after six to eight weeks tasted like a great double IPA without the alcohol burn.