It’s getting down to the wire to brew Winter beers that need anything more than a week or two of aging.  What to brew?  Jubelale!  Brew It Right™ hasn’t brewed often with dark crystal, so the use of Crystal 80 and Crystal 160 in this recipe intrigues us.  But first, a diversion…

And here we ain’t got that many.  The house service is 100 amps and the main electrical panel is almost that many years old.  Just kidding.  But it’s so bad that you can’t run any 30+ amp continuous load (brewing, clothes dryer, air conditioner) without the main 100A breaker getting really hot and eventually tripping, causing a major brewing bummer.  So we use this:

Replacement breakers on eBay are obviously used and quite possibly just as bad as the one existing one.  Once the HLT or boil kettle is at temperature everything is fine, but it’s the 40 minute continuous load ramp-up that makes the panel contemplate self-immolation.  We’re going to upgrade to 200A service this winter, but we’ll have to reach deep into some paychecks for it. 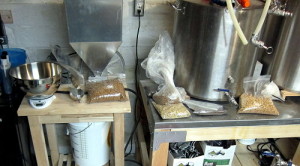 Dough-in landed the mash at 150F instead of the 152F we were hoping for.  Since there are a couple variables involved in maintaining mash temperatures (thermal mass of the water and grain, pump speed, ambient temperature, etc), each brew works out a bit differently until you get to know your system well.  How long that takes depends on how often you brew. 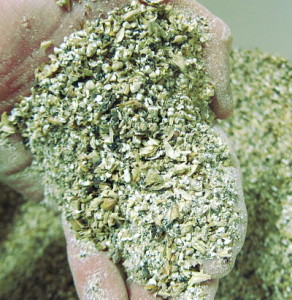 The Brew It Right system has two active temperature probes during the mash: one in the HLT and a second on the HERMS coil exit.  The center of the mash usually reads about 2 degrees cooler than the HERMS coil exit, which usually reads about 2 degrees lower than the HLT.  Yes, you can speed up your pumps to bring the mash closer to HLT temperature, but that also means the wort doesn’t spend as much time in the HERMS coil and doesn’t pick up as much heat from the HLT.  So you need to reach a happy equilibrium, figure out a standard pump speed and HLT/MLT temperature differentials, write them down, and keep using them.

After adjusting temperatures and reaching the right mash temperature of 152F, sparge first runnings were about 14 Plato (1.056) and didn’t drop, resulting in 7.3 gallons at 14 Plato.  Since the last runnings were obviously nowhere near 1.010 (which starts extracting tannins from the grain husks) why waste a ton of great wort?  Partigyle it!  After filling the boil kettle, the left-over Jubelale mash got topped off with two pounds of Maris Otter and a half pound of wheat malt, was left to sit for about an hour around 148F, and then drained off into a bucket for the second beer.

It was boiled.  Hops were added.  Whirlfloc not forgotten.  Chilled and kegged to 75F, yeast dumped, dropped into the fermentation chamber.  The final gravity was 1.068, just shy of where it should be.  Adding a bit more wort and boiling longer before starting the hop clock would have bumped the gravity up to the recipe’s 1.069, but that takes time and there wasn’t enough of it with another brew on deck.  All in all, a pretty successful night.

It’s a crime to waste good wort.  We had 7 gallons of 1.027 wort just sitting in a bucket from the Jubelale mash and extra grain.  Time to brew number two…  Since it’s also a crime to waste good hops, the left-over Jubelale hops formed the backbone of this beer:  0.4 oz Galena at 60 minutes followed by 0.5 oz Willamette at 15 minutes for around 30 IBU.  After Whirlfloc and yeast nutrient at 10 minutes, we kegged about 4.5 gallons at 1.038 gravity and pitched a pack of Nottingham yeast straight into the wort.  Ideally it ferments down to 1.010 or lower for a light, dry bitter around 3.5% ABV.  It added a total of 1.5 hours to the brew day; not bad for another 5 gallons of beer.

In a previous post we installed a second vent fan; how well did it work for this brew?  Not as well as we hoped, but much better than we feared.  The vent still doesn’t trap all the steam from the boil kettle during a particularly vigorous boil, but the amount of condensation on the top and sides of the vent is hugely reduced.  Next time we’ll try repositioning the pots with the boil kettle in the middle, centered between both fans.

If you hadn’t guessed, your brewery is a never-ending project demanding continuous improvement.  That’s how you Brew It Right.

Hard to believe, but Brew It Right™ hasn’t brewed an IPA since early July.  So we decided to dig into this one by researching the ingredients and statistics of a number of IPAs we enjoy and respect, and construct rough parameters and ingredient options based on them.  Then we created a unique recipe within this framework and brewed it.  We will continue refining this recipe until we Brew It Right™.

Some of the beers feature less-used hops (Rakau, Palisade, Glacier, Boadicea, Pilgrim), but we’re sticking with American hops.  We’ll branch out to include some Golden Promise for a bit more sweetness and depth.  Since we’re not a huge fan of crystal-bombs, the C60 is only 4% of the grain bill, and there’s a bit of roast barley thrown in for color because nobody had Black Patent lying around.  Target OG is 15.4 Plato (1.063).

The boil resulted in 4.75 gallons of 18 Plato wort (1.074) chilled and kegged, with rehydrated US-05 yeast pitched and fermentation set at 67°F in the fermentation chamber.

Wow, what an awful taste.  First off, too sweet, and the aroma hops (mostly Cluster) just don’t work with the sweetness of the malt.  Maybe it will get better with time, but we certainly know what we won’t do in the future: pair a large amount of Golden Promise with late-addition Cluster.

When building the original Brew It Right™ brewery, the only viable vent option was out the glass-block window behind the brew bench.  Time for Q&A:

How you do you vent out a glass block window? 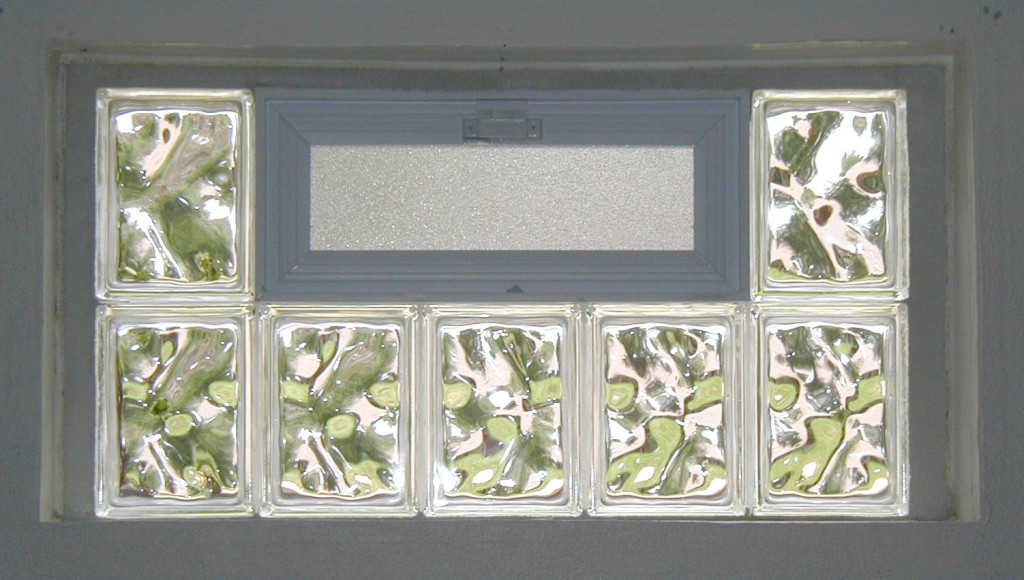 You start with a window that looks like this.  Notice how the blocks beside the pull-down vent are not square; this prevents using 6″ PVC drain pipe because the blocks are less than 6″ wide.  So you have to use 4″ PVC drain pipe instead, which means you buy a 105mm diamond grit hole saw to cut through the blocks.  Yes, there was a $25-off coupon the day I bought it.  Yes, it was still stupidly expensive.  But here at Brew It Right™ we also Do It Right.

Hot tip: buy the Bosch mandrel so you don’t walk all over the glass when you’re starting your cut, otherwise you’ll end up with some modern glass block art that looks nothing like a 4″ hole.

Aren’t there two sides to each glass block?

You’re entirely correct!  It’s like cutting tile, only it’s thicker and takes 5 times longer to cut!  Each side is about a half-inch thick, and it takes a really, really long time to drill through.  Worse yet, you have to make sure that the outside hole is slightly lower than the inside one, so that any condensation that makes it through the fan trickles down to the vent, not back into the fan.

Hot tip #2: spray the cut with water periodically to reduce heat and friction.

Correct again!  Unfortunately, diamond grit hole saws larger than 105mm are insanely expensive.  We don’t do it that right here at Brew It Right™ ’cause damn, we’re not rich.  So instead, cut a 105mm hole and then use a $5 grinding bit on the end of a drill until the 4″ drain pipe fits.  Then silicone seal to weatherize and fill in the gaps.

Two fans are better than one 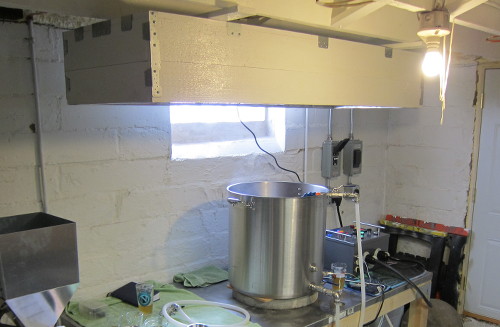 The original plan called for a single ActiveAir ACDF6 in-line fan hooked up to a 6″->4″ PVC reducer, then vented out the glass block window.  Unfortunately, the 6″ fan doesn’t pull out enough steam to handle a full boil.  Brew It Right™ has no idea why this is the case; perhaps it has something to do with back-pressure created by the reducer which kills the CFMs.  The vent itself closely follows Kal’s dimensions for his custom condensate hood, including the size (about 11″ tall) and height above the boil kettle (16″), so it seems like the fan and reducer are the problem.

Clearly a second fan is in order; Brew It Right™ purchased a 4″ in-line ActiveAir fan and installed on the opposite side of the glass block window.  Obviously this entailed using the diamond grit hole saw a second time, which nobody here was particularly enthusiastic about due to the time required and bodily contortions involved.

Keen observers will note that a different exterior vent is used on the new fan.  The original cover was a spring-loaded flush exterior vent, but it turns out the spring isn’t very strong and you have to go outside to make sure it closes every time you use it.  It’s cold here in the winter, so that’s not very fun.  Thus the standard dryer vent cover on the new vent, a product of trying and half-failing the first time around.

Inside, the new fan was mounted to a bady-cut cut hole in the vent using a Dremel 4000 with a router bit, since there wasn’t enough space for the jigsaw used for the original 6″ fan hole.  Then, 4″ PVC drain pipe was slid through the hole and over the fan outlet, and a standard clothes dryer vent attached to the end of the drain pipe with silicone. 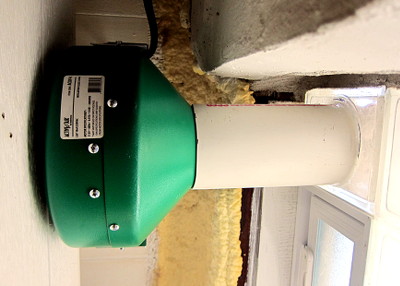 The fan was then secured to the ceiling using thick metal bars to ensure it didn’t vibrate itself out of place.  While we haven’t brewed with it yet, we’re confident it will provide the CFM boost required to pull out the extra moisture that the 6″ fan cannot.  Updates to come on how it works out…

Incremental improvements?  I would make none; this was a good solid bitter, and only got better with time.  I’ve become more interested in British milds and bitters recently, so expect to see more of them here.