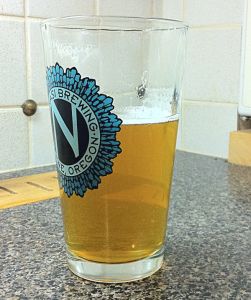 Back in September we brewed a Fresh Hop beer with almost 5lbs of hops.  There’s no easy way to say this, we put in too many hops.  Apparently there is an upper limit.  Right after tapping the keg it tasted like chewing on hop cones, so we left it alone for a while to settle down.

While it did mellow out, it’s still not “good”.  We think this was a combination of three factors:

We think we nailed the malt bill though.  It’s not too heavy and has great lacing and isn’t too sweet.  We’ll use it again, just with different hops more suited to its clean profile.

But even when you get a beer that’s not quite right, but not quite wrong, you can mix it.  A total throwback play to the 1800s, but we discovered that a 45/45/10 ratio of our Imperial Stout/Pumpkin/Fresh Hop was great.  Don’t waste a beer!