While recently in the Czech Republic, Brew It Right™ was clearly required to sample various Moravian brews and provide a full report.  This task was not taken lightly and required considerable sacrifice and concentration.  Obviously, almost all of the beer in Czech pubs are lagers, so you’ll find a precious few taps pouring ale unless it’s a hefeweizen.

Copy this list to your phone and take it with you.  Or just do what we did; order one of everything on the list and try it.  You might be pleasantly surprised.

While the local Starobrno brewery is great and their Starobrno Černé is (in our opinion) one of the better tasting regional brews in Moravia, the brewery is actually owned by Heineken. So if you’re trying to stay away from anything macro-related, they aren’t what you’re looking for.

Instead, try the Hotel Pegas in Brno, a hotel and restaurant with its own brewery.  Walk in and copper brew kettles are already on display right behind the bar.  And the beer is actually quite good, showing more variety than you’ll find in a lot of the pubs.  Pegas gets bonus points for attempting the only ale (besides hefeweizen) we found: a special porter.  But we’re deducting some of those points because it’s served in a smaller glass than any of the other brews, and after a week of lager we really, really wanted a full glass of ale.  The food is pretty good good too, though in typical outside-of-Prague Czech fashion, vegetables are nowhere to be found unless pickled.

Another to look for is Pivovar Poutnik which makes a couple pilsners.  For a respite from pilsner, try the Černé (dark) from Velkopopovický Kozel (though owned by Pilsner Urquell/SAB Miller).  Beware that many of the regional or local breweries (like Kozel or Starobrno) are all owned by international conglomerates, but many still make good beer.

Of course we had to try and find a homebrew shop, and found one we did: Pivo Ogar.  Unfortunately we got there five minutes late, but we did see a shelf of homebrew stuff and some sacks of malt behind the counter.  No kits though…

We’ve never brewed a lager here at BIR because we didn’t have a proper fermentation and lagering chamber.  But now we have chest freezer and an Auber Instruments dual-stage temperature controller, and we can lager with the best of them (hah!).

You probably know this already, so feel free to skip ahead if you’re bored.  Beer is often divided into two large groups: lager and ale.  While they each developed distinctive styles over time, only one thing really separates them: yeast.

Ale yeast likes to be warm (mid 60s) but if too warm, it produces bad flavors, and if too cold, it just goes to sleep.  It’s also referred to as “top-fermenting” since it stays quite active, produces a lot of krausen, and tends to be caught in the foam.  Ale yeast produces more esters and these often contribute much of the flavor associated with classic ale styles.  Total time from “grain to glass” can be as little as two weeks.

Lager, on the other hand, likes to be quite cool (upper 40s to lower 50s) while fermenting and works much more slowly.  After primary fermentation is done, the beer may only be 40% to 60% fermented, and usually contains by-products of the fermentation process that smell like rotten eggs (sulphur) or butterscotch (diacetyl) or green apple (acetaldehyde).  This requires a long, cold lagering (from German, “to store”) period during which the yeast clean up all these by-products, and all the haze-causing proteins clump together, drop out, and produce soft-flavored crystal-clear beer.  Unlike ales, a lager takes at least 8 to 12 weeks to be ready, often longer.

Yeah, that’s right.  I hope it’s worth it.  But we had 7 pounds of Briess Light Munich and some Saaz to use up, and brewing a Bock beer was the best way to do it.  But even more importantly, we have to perfect our lager process in preparation for our Holy Grail: National Bohemian Beer.  We don’t want to screw that up, so this brew is a test run.  One of us started the drinking life in Baltimore and hooked the rest of us on Natty Boh, and 2014 is the year we’re gonna clone it.  Say hello to a summer keg party.

We started out with a 5 gallon recipe just to use up the Light Munich, Saaz, and Victory.  But why brew 5 gallons when 10 is just as easy?

Side note: all Continental Munich malt (ie, European) is made from 2-row barley.  Standard US Munich is made from 6-row barley, so to create the most authentic Bock try to find some 2-row, either European or domestic.  It happens that Briess Bonlander Munich is just the malt we’re looking for… 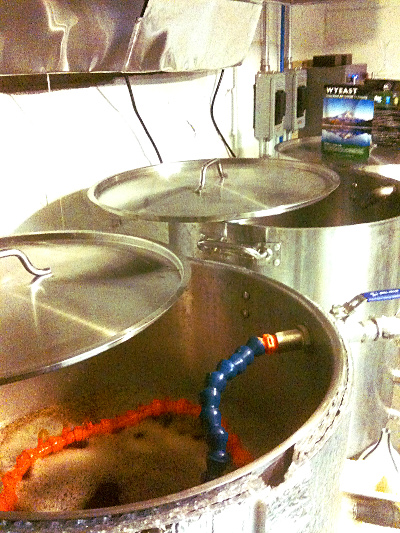 The Caramel 20 and one pound of the Light Crystal weren’t in the original recipe, but once the overpowering smell of biscuits hit us we panicked and dumped them into the mash.  All the base malts (Victory, Bonlander Munich, and Light Munich) have quite a bit of biscuit or cracker flavor and smell, and some of that carries into the finished beer.  We really, really hope this isn’t a Biscuit Bomb.

This time we took gravity readings during the mash with the hydrometer, which proved inconclusive.  The first reading about 10 minutes after the mash started was around 15 Plato, then up to 16 Plato, then back to 15.  You’d think that as the mash progressed and the water leached more sugars out of the grain, that the gravity would increase, but we didn’t find that to be the case this time.  An experiment for later?

Overall the brew went smoothly, except for one thing:  where do you put the grains when it’s below zero outside?  We’ve got a compost heap, but it was rock-solid.  Thankfully, draining all the left-over hot water from the mash tun and dumping it onto the compost thawed it enough to dig a hole into which all the grain fit.  That still meant a couple trips outside in negative degree weather, which sucked.

We ended up with two kegs full of 1.066 gravity wort.  Both got some Fermcap S.  One got aerated with pure O2 for about 30 seconds, and then was pitched with a packet of rehydrated US-05.  We’re hoping it’ll turn into a nice American Amber ale, which we can compare to the Bock.  But given the time a lager takes, we might just drink it before that.

For the second keg, we aerated for one minute with pure O2 since we’ve read that lager yeast wants more oxygen than ale yeast does.  Then we pitched two smack-packs of Wyeast 2206 Bavarian Lager and tossed it into the chest freezer set to 50 degrees.  We’ll keep it here for three weeks before transferring to secondary for the two-month lagering period at 40 degrees, and hopefully it’ll be ready around late March, just in time for Bock season.

Imagine our surprise when we came down to the brewery the other day and found our aeration stone covered in mold.  Yikes!  During aeration the stone is immersed in wort and apparently rinsing it off is not an adequate cleaning strategy.  Lesson learned; before the brew we scrubbed it off, boiled it for 10 minutes, soaked it in PBW for a couple hours, and then StarSan.  After the brew we boiled it again, and we’re storing it in an open plastic bag instead of a closed one, to allow it to completely dry out between brews.