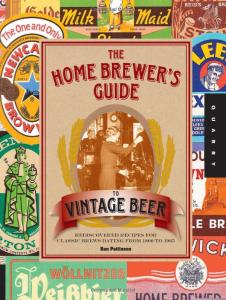 If you haven’t read Ron Pattinson’s “Shut up about Barclay Perkins” blog or leafed through a copy of his recent book The Home Brewer’s Guide to Vintage Beer, you’re missing out, especially if you like British beer.  The book is crammed full of recipes for historic British ales, painstakingly recreated from actual brewing records.  It’s a gem, and a must-have addition to your British real ale library along with Graham Wheeler’s Brew Your Own British Real Ale and Dave Line’s Brew Beers Like Those You Buy.  We’ve had Vintage Beer in our library for a while, just looking for an excuse to brew something from it.  Given the cooler weather and leaves and pumpkins and stuff, we thought a porter would be perfect.

The original recipe specified Goldings all the way through, but we had few Goldings and many Fuggles.  The hopback addition is also not in the original recipe, but when you’ve got bling you have to use it or you loose a lot of cred with the cool kids.

Note the use of brown malt, which is a 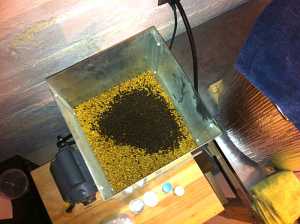 rarity these days in commercial brews, supplanted by much more efficient pale malts with small amounts of black malt for color.  Only Fuller’s still uses brown malt in quantity for their London Porter.  But with the rise of craft brewing you can find brown malt just about anywhere.

Also note the higher percentage of Crystal 60L compared to most other recipes you might have seen.  Crystal malts contain more unfermentable sugars than base malts like 2-row, Maris Otter, and Pilsner malt.  Furthermore, higher mash temps like this recipe specifies favor less fermentable sugars during the mash and thus contribute mouth-feel to the finished beer.  So we expect this porter to be fuller-bodied and sweeter than most other English beers we’ve brewed.

Our mash efficiency was good, resulting in a much stronger pre-boil wort (8 gallons @ 12° Plato) than we expected.  But our boiloff estimate was too low, resulting in less-but-stronger wort at the end of the boil (4.5 gallons @ 18° Plato).  Ideally we would have diluted the initial wort, boiled off the same amount, and ended up right on the money. 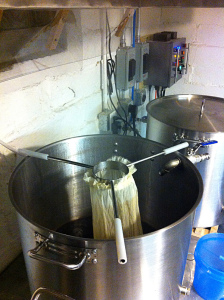 One reason our mash efficiency was better was that we flipped around the worn washers in our Chugger pump heads.  Since they’re almost 18 months old, and washers do wear down, the large washer at the rear of the pump head against which the impeller rides had developed a concave appearance.

This caused the impellers to rub against the rear of the pump head when the output flow was restricted, which is exactly what want when you’re sparging.  Our previous two brews suffered efficiency because our sparge rate was too high, caused by opening the pump outputs more to prevent screeching due to the worn washers.  We’re trying to track down replacements, but apparently it’s hard.  Do other brewers just not run their pumps as much as we do?  In any case, we’re glad to have found out what the issue was, and fix it for at least a couple more brews. 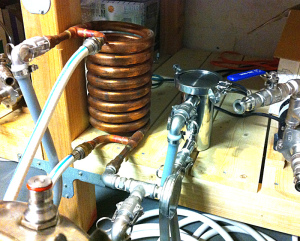 On a side note, we’re having trouble hitting our mash temps using the Brewer’s Friend strike calculator, probably because our mash tun is a 25 gallon stainless kettle that we’re not pre-heating at all.  So all that strike water hits cold steel and chills down pretty fast.  In the future we’ll start raising our strike water temperature in an attempt to more accurately hit mash targets, which is all part of dialing your system in.

We kegged 4.5 gallons of 1.074 SG wort pumped through our hopback, and fermented at 67°F for two weeks, ending up with 1.026 SG beer for an ABV of 6.3% ABV.  That’s a much higher finishing gravity and lower ABV than we expected, which could be due to the high percentage of Crystal 60L malt.

How should we use up the rest of our Maris Otter?  We’d love to brew a “stock ale” from The Home Brewer’s Guide to Vintage Beer so maybe we’ll try making our own invert sugar, which most of these recipes seem to require.  Till then!