With Pumpkin #2 our efficiency was good enough to produce 5.5 gallons of additional runnings at 4°P (1.020) when we drained the mash tun before cleaning it out.  We thought it would be a shame to waste all that wort, so we didn’t.  We brewed a bonus beer instead.

A bonus beer is great way to use up small amounts of specialty grains and hops you have lying around.  You can’t accurately reproduce the recipe, so it’s like a free batch of no-pressure, OG-be-damned beer that you were just going to dump down the drain anyway.  Plus, it can mash while you’re boiling and chilling the parent beer, so all it takes is another hour.  Why not?

We scrounged up some Victory, C150, and 2-year old Briess 2-row from our malt library, milled it, and tossed it into large grain bag.  The bag was then placed into a bucket with the final runnings from Pumpkin #2.  Because all the enzymes from the original mash were denatured due to mashout and the final runnings were well below the target mash temp of 148°F, we added some amylase enzyme to help conversion along.  We also attempted to top up with boiling water to move closer to normal mash temps, but couldn’t get much higher than 135°F due to lack of space in the bucket.

To compensate we dumped the contents of the bucket into the boil kettle on top of the left-over hot break and trub from Pumpkin #2.  Then we added the grain bag, set the PID for 152°F, and recirculated for 15 minutes to attempt more complete conversion.  After squeezing out the grain bag as much as we could, we got about 6 gallons of 9°P (1.036) wort. 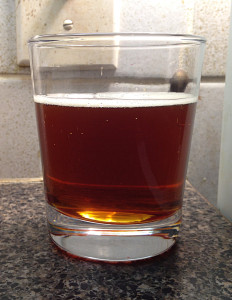 The beer is a nice amber color and quite clear.  It pours with a nice foamy head that soon settles back but leaves a nice ring of foam on the outside.  The smell is mostly spicy malt with no fruity or flowery notes.  Taste is initially malty which quickly fades to a slight sweetness with a hint of spice, but overall a drier beer.  And as you’d expect with a 1.010 beer, mouthfeel is thin but countered somewhat by a higher carbonation level.

We’re surprised with how well this one turned out, since we weren’t expecting much from a bunch of old malt and some second runnings.  But we got a pretty good beer with just a bit more work.  Bonus!