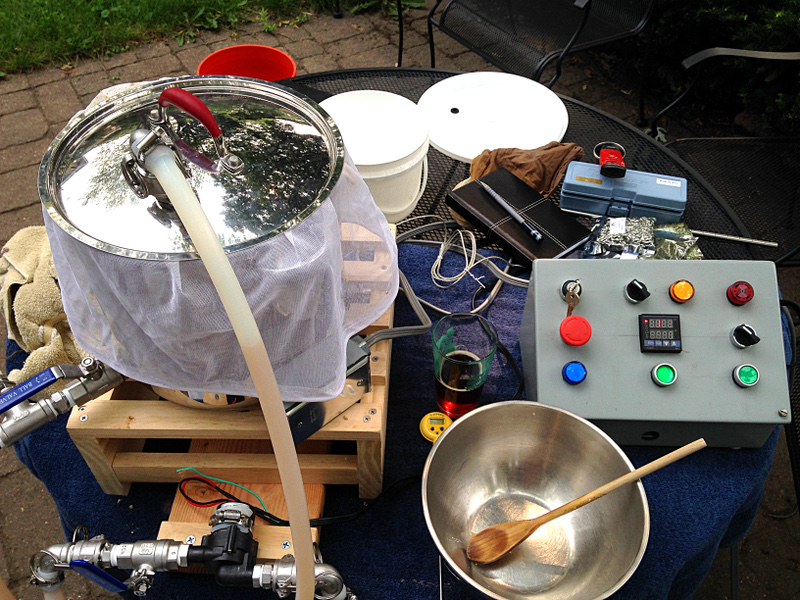 Now that it’s summer and the days get hot, we want a drinkable beer without a ton of alcohol but no lack of hoppiness.  That means a session IPA.  We’ve had some bad ones, and we’ve had some good ones, so what makes a good one?  Can we make a good one?

The generally accepted definition of a session IPA seems to be a hoppy pale ale that is 5% ABV or less.  Even 5% seems pretty high ABV to us, since we want to drink a lot of it and not fall off the bench.  The term “session” originally came from the UK where most of the “milds” that pub patrons drank were between 3% and 4% ABV.  To us 3% or 4% seems just about right; but a 5% “session IPA” is really just a hoppy American Pale Ale and no challenge whatsoever…

Since we enjoy difficult things, our goal was to create a 3.5% ABV beer with the hop character of an IPA and enough maltiness and body that nobody would confuse it with Bud Light.  It’s supposedly difficult to get the right balance of maltiness, body, and hoppiness with very low alcohol beers, since the low original gravity often means lower body and thinner taste.  That implies fewer hops since the lack of malt flavor won’t be able to balance the bitterness as well.  But since IPAs are known for the buckets of hops brewers throw in, how could we bridge the gap?

First, we can mash higher to favor the alpha amylase enzyme, producing a sweeter, less fermentable wort which will raise the finishing gravity and provide more body.  Second, we can add more specialty malts than usual to increase the malty flavor of the beer.  Third, we can add quick oats to increase the amount of beta glucans, which are not fermentable and add body to the wort.

For the hop side of things, while we’re shooting for an IPA, we still need to keep the hop rate lower than an IPA to ensure we don’t end up with hop tea.  We can use more hops than normal for a 1.040 beer since we’re increasing the body, but we’ve still got to be careful.  We’re aiming for about 70 IBU total, but only 25 of those IBU from the early bittering hops.  The rest will come from late aroma/flavor hops and a hopstand, which will contribute a much mellower bitterness.  Fourth, we’ll use an English yeast that accentuates the malt more than a clean US strain like S-05 would.

Finally, the weather is so nice right now, we’re going to brew this outside on our 3-gallon 120V electric Brew-In-A-Bag system, but we’re still going to make a 5-gallon batch.  This means we need to top up from 3 gallons to 5 after our boil, making some gravity calculations more complicated.

We have an element protector screen on our small system, which ensures the bag containing up to 7lbs of grain does not rest on the element, which could cause scorching or put strain on the element’s gasket.  Unfortunately, this screen isn’t quite the right size for our kettle, and doesn’t have enough holes for good circulation.  This meant we spent a while playing with the pump’s output valve before finding the right flow rate that wouldn’t suck the bag down into the kettle through the gap between the protector screen and the kettle wall.  Once found we could finally leave the mash alone and not worry about getting grain into the recirculating wort.

This was also the first brew with a new 5500W Camco ULWD ripple element.  We had scorching on the previous LWD element in this system, especially with a recent Hefeweizen (though it didn’t affect the flavor).  While the old element was a 5500W/240V LWD, we ran it at 120V which quarters the wattage to 1375 and thus also quarters the watt density into ULWD territory.  But for whatever reason we still had scorching, so the element had to go.  It was quite difficult to bend the Camco ripple element to the right shape, while still ensuring it could be maneuvered into the kettle through the hole in the side.  But ultimately successful, and we had no scorching with the new, lower watt density element.

Everything went well and we ended up with between 2.5 and 3 gallons of 16°P wort, which we topped up with boiled, filtered water to 4.5 gallons for a final gravity of 1.040.  After pitching the yeast we tossed the keg into our fermentation chamber (a modified Vissani 52 bottle wine fridge) set to 67°F for a one-week primary fermentation.  We then had to move it out to make room for our partigyle IPA and Pale, which we’ll talk about next time!

Two months ago we decided to jump back to our extract-brewing beginnings and see what kind of American Amber we could make.  We used amber malt syrup and gold malt extract for the base fermentables and some Crystal 10L and Amber malt for steeping grains.  We were pleasantly surprised by this one, although our expectations weren’t high to begin with…

Appearance: great amber color and after 6 weeks in the keg, very clear when held up to light.  Pours with a medium-dense head that sticks around for a while and clings to the sides of the glass.

Smell: sweet malt and some citrus, but not overly malty.  Even with the dry-hops and right after carbonating, it didn’t have a huge hop aroma.  Which is fine, since this wasn’t intended to be a hop bomb.

Taste: very mellow, balanced bitterness from the hops backed by semi-sweet malt but no grainy flavors.  A bit muddled perhaps, with all the malt flavors blending into one another for a single malty note.  This is perhaps the only let-down of this brew.

Mouthfeel: possibly due to the amount of crystal malt used, this brew has just the right amount of body for a traditional amber beer.

Next time: since darker malt extracts often incorporate specialty grains already (in this case, C60L and Munich in addition to the pale base malt) and we added more steeping grains, there might have been a bit too much crystal malt in this beer.  Next time we would decrease the C10L by half, use pure Pilsen malt extract instead of Golden Light (which includes Carapils), and add some Aromatic malt for extra malty flavor.  This should result in a more drinkable beer without sacrificing much color or maltiness.  Also, we’ll use more dry-hops for a hoppier aroma right out of the tap.