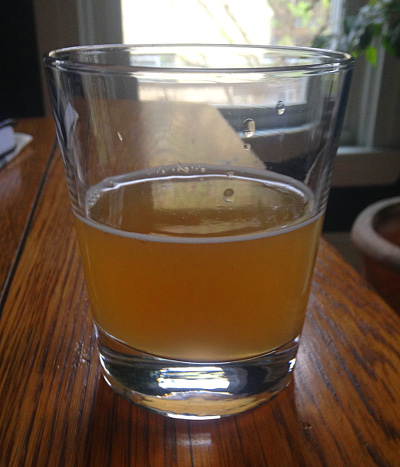 We brewed this in late March and it’s almost gone, because people keep asking for growlers.  We’ll take that as a good sign.  It’s also entered in a competition, although in the ever-popular IPA category, and we’ll post an update if it wins anything.

Appearance: straw gold, very clear (ignore the picture, that’s the end of the keg).  IPAs are typically darker than this (which may cause a point deduction in the competition) but since Pilsner is the only malt in the beer, this is no surprise.  It pours with a one-finger head which quickly falls back to a thing ring around the top, which clings to the glass.

Smell: some said “grapefruit”, but we get some mango.  There is none of the supposedly typical Simcoe pine-tree or cat-urine.  We do smell the sweeter notes of Pilsner malt too, but overall, even with the dry-hops and higher carbonation (which carries the smell to your nose) we don’t get a ton of aroma.

Taste: Pilsner, like a Czech Pilsner.  And citrus.  Some said “grapefruit peel” and we do get a bit of that.  There’s a good initial bitterness but not overly agressive, dissolving into a mellow citrus-flavored finish.   All in all, a great easy-drinking summer beer.  We think it’s a bit too sweet due to only using the Pilsner malt, so next time we’ll be using it 50 or 60% 2-row.  No longer a SMASH, but hopefully a more balanced beer.

Mouthfeel: nicely balanced body, not thin at all.  It’s light enough to drink a couple pints but heavy enough that you know you’re drinking an IPA.  Nailed this, despite 0% crystal malt or Carapils, possibly due to the higher mash temperature (152°F) and higher carbonation.

Next time: we’ll probably use 40 to 60% 2-row (or maybe even Marris Otter) to cut down on the Pilsner sweetness to create a more “American” style beer.  We think the hop schedule worked extremely well, though we might add 1/4oz more 60 minute hops for a more aggressive start.  We Brewed It Right.