Since our boil kettle was first constructed last year we followed Kal’s lead and used a Hop Stopper to filter wort.  This product works fairly well and prevents both hops and some break material from hitting the chiller and eventually the fermenter.  It’s easy to clean with a kitchen sprayer, and is very well constructed.

But the Hop Stopper does have some drawbacks:

Whirlpooling is the circulation of the wort in the boil kettle after the boil is done to concentrate the hot break, cold break, grain particles, and hop bits into the center of the kettle.  Due to the magic of physics and fluid dynamics solid particles will move to the center when the liquid is stirred and then allowed to settle.  This leaves clear wort at the sides, and with a side pickup in the kettle, allows you to leave most of the solid stuff behind providing clearer wort and eventually clearer beer.

Second, you can use the whirlpool to provide increased hop aroma and flavor by steeping a separate addition of hops while the whirlpool is circulating.  Since during the whirlpool the wort is around 170 – 200°F (82 – 93°C) volatile flavor and aroma compounds are not driven off like they are during the boil.  Many traditional UK breweries use this technique to increase the complexity and clarity of their beer.  We’d like to try it too.

The first step was the removal of the Hop Stopper and the addition of a side pickup.  Instead of a traditional dip tube, we decided to use a 90° street elbow 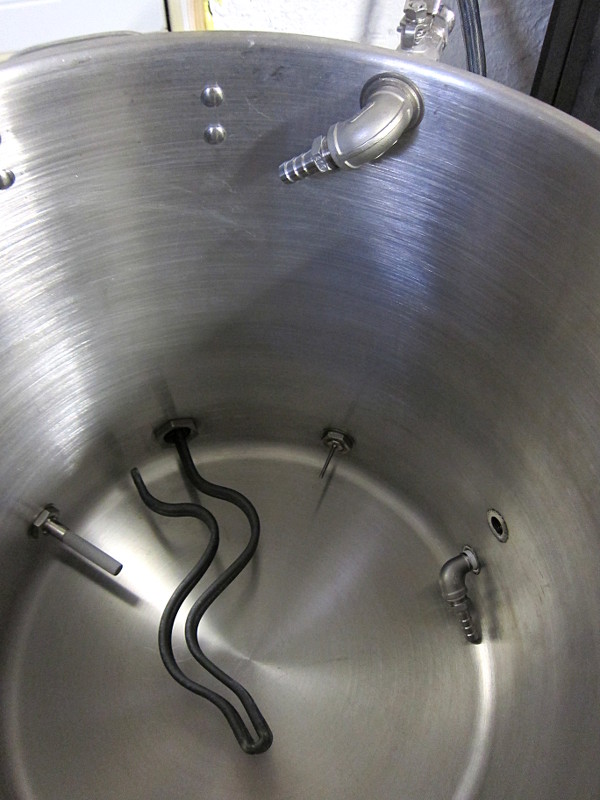 Since the barb draws from the side, after the whirlpool has settled all the break material and hops in the center, and only clear wort is left on the sides, we’ll only get clear wort into the fermenter.

Next because we use pumps, we need some mechanism to induce the whirlpool in the kettle.  Yes, we could stir vigorously with a spoon, and we’ve tried that, but it doesn’t work as well as you’d think due to the magnesium anode, the heating element, and the thermometer getting in the way during 5 gallon brews.  Instead, we constructed a whirlpool arm that attaches to our kettle inlet and is easily removed for 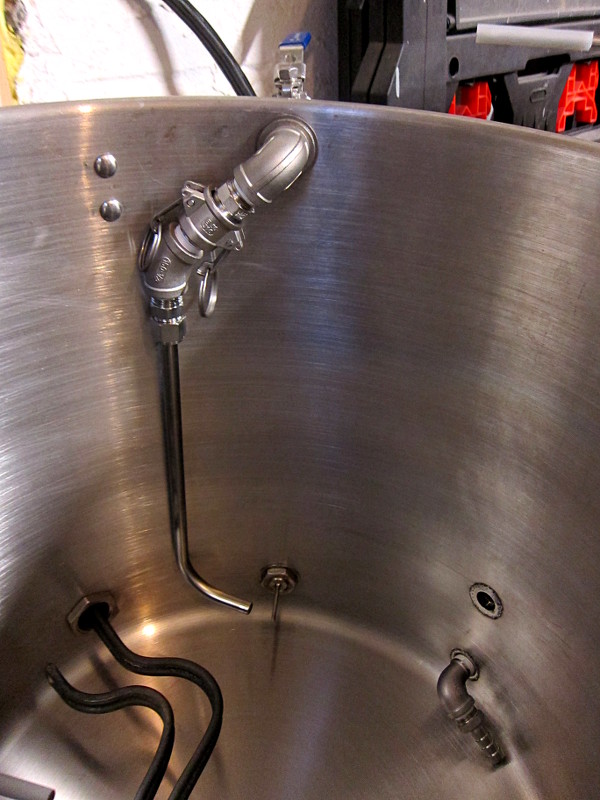 As you can see, attached to the upper kettle inlet is the new whirlpool arm, which directs the wort along the side of the kettle and induces the actual whirlpool when wort is taken from the kettle and pumped back in.  The bottom level of the arm allows us to still brew and whirlpool 5 gallon batches if we want to.

Why did we choose a camlock fitting for the arm?  Well, when we’re fly-sparging, wort is continuously draining into the kettle and we need to monitor the gravity to ensure it doesn’t drop below 1.010, which begins to extract undesirable tannins from the grain husks in the mash.  The boil kettle inlet is where we collect the sample from, and we need it to be easily accessible, so we’ll only attach the whirlpool arm after the boil is done.  Second, allowing the whirlpool arm to be disconnected helps ensure it can be cleaned well.

We don’t actually have a finale yet since we haven’t tried the whirlpool arm in a full brew.  But we have tried the kettle outlet barb fitting, and it works great.  We’ll definitely let you know how the whirlpool arm performs in the next brew.  Stay tuned!