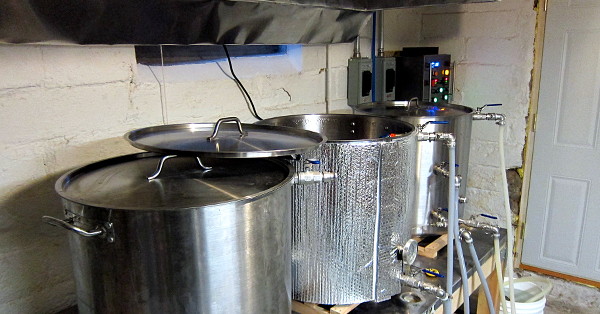 Double IPA blah blah Belgian blah blah.  Nobody seems to care much about Porters these days, but they have a long and storied history starting in the working-class neighborhoods of London.  And Autumn is a perfect time to brew one.

I was intrigued by the use of brown malt in Fuller’s London Porter, as it used to be the only malt you could get (until the Industrial Revolution foisted “smokeless” fuels upon the world) and thus adds historic character to the recipe.  Since I can’t recall any craft beer I’ve tasted that uses it, I’ll have to fall on that sword and try it out.

But there’s a problem.  Wheeler has one recipe, while Brew Your Own has a different one, and the Interwebs have many others.  Which one is right?  Wheeler’s recipe (converted from 19L) clocked in at 19 SRM and low on alcohol, but it does use a 90 minute boil like most British recipes.  BYO, on the other hand, used a 60 minute boil, but all of the stats checked out, and the recipe was reviewed by Fuller’s themselves.  Thus BYO it was.

For yeast, sources recommend Wyeast 1968 London ESB or White Labs WLP002, both of which are reputed to be Fuller’s yeast.  This strain doesn’t have very high alchohol tolerance, and doesn’t attenuate very well, leading calculators to indicate my FG would be high around 1.018 or 1.019.  I’m hoping it decides to outperform.

Due to bad planning I didn’t have enough Chocolate malt, so I had to substitute 4 oz of roast barley.  I also added 1oz black malt for a slightly darker color as the BYO recipe also didn’t come out quite as dark as I wanted.  Neither of these changes will have much effect on the flavor, thankfully.

Mash-in is somewhat complicated because I try to keep the HERMS coil underwater in the HLT to ensure mash temperature is as stable as possible.  So after reaching strike temps in the HLT, I run the strike water to the MLT and set up recirculation through the HERMS coil to ensure the strike water remains at strike temperature.  Once that’s done, I shut off the mash pump, dough in, and let the mash rest while I refill the HLT with cold water until it has dropped to mash temp, which takes a few minutes.  Then I start up the mash pump again and off we go.

Starting at 164F and adding the grain set the mash temp right on target: 153F.  The large proportion of dark grains dropped the mash pH to 5.4, which I adjusted down to 5.3-ish using lactic acid.  Most brews with lighter grain bills start around pH 5.8 with my city water, so this was a pleasant surprise.

First runnings were 1.052, and the sparge ran long at almost 1 1/2 hours to collect about 7 gallons with a boil gravity of 1.044.  That gravity seemed a little low for a 60 minute boil, so I ended up doing a 90 minute boil to reduce volume and bump up the gravity.  I stuck with the hop schedule though, adding the hops with 60 and 10 minutes left in the boil.  Ending gravity was 1.062 into the fermenter.

Which means some number is wrong.  I’m very confident that the 1.062 is right, meaning that the boil gravity reading is somehow incorrect.  There are two possibilities here.  First, perhaps I didn’t stir the boil kettle enough before drawing off a sample;  wort does stratify in the boil kettle since the first runnings are higher gravity than later ones.  Second, since hydrometers don’t work well over 80F I have to cool wort samples down, and I do that in a bucket of water.  I may have let some of that water get into the sample, diluting the gravity.  Solving this second problem requires buying a refractometer, which uses small samples that cool very quickly.  Solving the first problem requires not being lazy.

Regardless, the airlock is happily bubbling away at 66F, and in two weeks we’ll know how awesome it tastes.  Cheers!